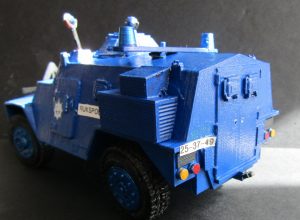 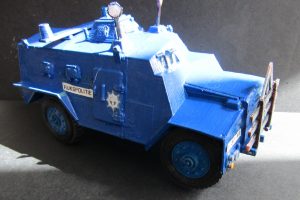 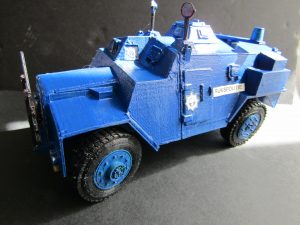 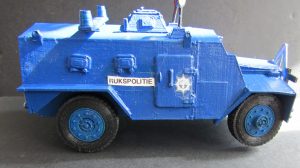 The GKN Sankey AT 104 (seen here depicted as the Dutch Police version) was a forerunner of the AT 105 Saxon and development of the AT 100. It was used by various organisation during the 1970’s as Command Vehicle, Ambulance and Riot control.

The AT104 was used in various roles by a variety of organisations including the Dutch Federal Police. The roles included Command Vehicle, Riot control and Ambulance. The AT104 was NOT used by the British Army, only the Dutch Police and the Royal Brunei Malay Regiment.

The Dutch Rukspolitie version would have cupola, searchlights, gun ports either 1 or 2 a side, side bin on rear left Bullbar and roof lights. the Army version would not have the rooflights or side bin. the ambulance may only have had the bull-bar.

The kit is complete with the necessary components to make the variants, however, we are unable to produce decals at this time – sorry.

I like Uhu glue for assembly. Dennis prefers plastic weld.

There are no reviews yet.

Only logged in customers who have purchased this product may leave a review.